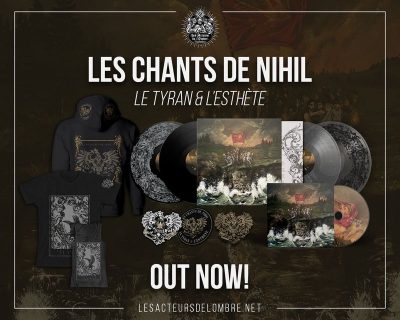 Some words of Gérald, label manager:
“I reckon many of you are familiar with LES CHANT DE NIHIL. As far as I’m concerned, I have been interested in this band since their first and incredible demo tape in 2008. And they have never ceased to offer ever more accomplished works since then. I also got in touch with the band several times for a potential collaboration… And my wish has become true since we have the honor and the privilege to release “Le tyran et l’esthète”, their fifth album. I must admit that I am very proud of this first collaboration: the band delivers a masterful opus here. We don’t always have a large visibility on albums we are going to release. Sometimes, it is impossible to listen to the mock-ups one year prior to the release, which usually is the minimum amount of time. But I didn’t feel any pressure, I knew I wouldn’t be disappointed. And what a blast! I can’t get tired of this album with each listening session being a discovery, a fruit with its skin peeled little by little so we catch a glimpse of a new dimension, that is fully grasped the next time only. Truly, this album has it all: a flawless and powerful production, breathtaking skills and technique, sickly melody and brutality, and an impressive avant-garde tone. And what about these voices which sound like a real opera and bring all the pieces together to erect a monumental work? Congratulations to the band!”