The album is a tribute to Geneva Odelia Hilliker Ellroy, a mother brutally murdered 3 months after her 10-year-old son, James Ellroy, cursed her to death.

James Ellroy is a noted American crime fiction author, a great master of the noir genre. He didn’t shed a tear upon learning of his mother’s death. His wish had been granted. It wasn’t a tragedy, but a consecration. With no suspect, the murder remained unsolved. He would never know who was responsible for his release. But in turn, he would spend his entire life paying the price of his emancipation with death. He was cursed with an obsessive fascination with sex, chaos, and femicide. A descent into hell, punctuated with drug addiction, fantasies and jail. After a near-death experience, he finds salvation in writing and chooses as a discreet guideline the terrible quest that still haunts him: who had killed this woman he did not know, his mother?

The album draws its essence from this passionate, brutal, mystical story. It is dedicated to the redemption of James Ellroy and to his infinite literary, sickly, obsessive, romantic catharsis, that culminated in Ma Part d’Ombre, a retrospective and introspective attempt at making sense, 35 years later, of the event that had “defined his life” and forged his personality. 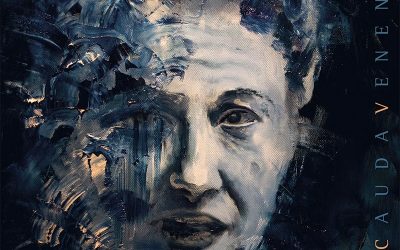 In Cauda Venenum is the kind of album that is guaranteed to get your attention. – Heathen Harvest

In Cauda Venenum is the kind of album that is guaranteed to get your attention. - Heathen Harvest Read the full review.

It’s a blend of beauty, finesse and emotional roller-coaster all packed into a couple of long, inspired, imaginative tracks. – Chronicles of Chaos

It's a blend of beauty, finesse and emotional roller-coaster all packed into a couple of long, inspired, imaginative tracks. - Chronicles of Chaos Read the full review.